In May of 1729, the first part of the first fully illustrated book on the flora and fauna of North America was presented to the Royal Society. Upon the conclusion of the work, Royal Society Secretary Cromwell Mortimer praised it as “the most magnificent Work I know of, since the Art of Printing has been discovered” (Nelson and Elliott, 165).

The work was The Natural History of Carolina, Florida, and the Bahama Islands, and all told it was issued in eleven parts (including an appendix) over an eighteen year period (from 1729-1747). It included 220 plates and accompanying pages of text, a map and account of North America, two indices, a preface, a dedication, and a list of subscribers.

The author of the work was Mark Catesby.

An expansive account of Catesby’s life and work is captured in The Curious Mister Catesby, edited by E. Charles Nelson and David J. Elliott, which received the 2016 CBHL (The Council on Botanical and Horticultural Libraries) Annual Literature Award for Overall Significant Contribution to the Literature of Botany or Horticulture. This work allows us to appreciate the extent of Catesby’s contribution to the study of North American biodiversity.

Mark Catesby was born on 24 March 1682/83 in England (probably in Castle Hedingham, Essex), the (probably) fifth son of John Catesby, a gentleman who became mayor of Sudbury in 1673. When John died in 1703, Mark received a substantial inheritance that included property in Sudbury and London, providing him with a level of security that would allow him to pursue his interest in natural history (Nelson and Elliott, 3-4, hereafter referred to as “N&E;”).

Catesby first set foot in North America in 1712. Serving as chaperone for his sister Elizabeth, whose husband Dr. William Cocke had arrived in Virginia some two years earlier, Catesby was hosted principally by prominent Virginian citizen William Byrd II during this first visit. Shortly after his arrival, Catesby began collecting plants, specimens of which he sent across the Atlantic to Samuel Dale and Dr. Henry Compton (Bishop of London). During these first several years in America, Catesby also visited Jamaica, Bermuda, Hispaniola, and Puerto Rico (N&E;, 8).

Catesby returned to England in 1719, possibly in response to his brother’s death two years earlier (N&E;, 9). He was, however, determined to return to North America and continue his study of the land’s rich flora and fauna. In 1722, he got his wish. This time, his trip was sponsored by members of the Royal Society, who hoped that he would collect specimens from and generally enhance natural history knowledge about this New World. From 1722-early 1725, Catesby explored and collected in South Carolina. The following year, from 1725-26, Catesby ventured to the Bahamas to continue his research (N&E;, 12-13).

During his time in America, Catesby not only collected specimens, many of which he sent back to England, but he also produced sketches and watercolors of the species he encountered. According to Henrietta McBurney, who wrote a chapter for The Curious Mister Catesby on Mark’s preparatory drawings for Natural History, the challenges of transporting the necessary art equipment into the field probably meant that Catesby made field drawings in pen and ink while traveling through the country and then worked up folio-sized watercolors, which would later be translated to etched plates for his publication, back at his lodgings (N&E;, 143). At all times, Catesby placed great emphasis on portraying each species in as life-like a manner as possible, working from live animals when possible and obtaining fresh supplies of specimens, like fish, whose color and appearance change rapidly after death (N&E;, 145).

In 1726, Catesby left the Bahamas and returned to England with the intention of publishing his accounts and illustrations in “a large folio on a grand, almost unprecedented scale” (N&E;, 155). Leslie K. Overstreet, Curator of Natural History Rare Books at the Smithsonian Libraries, provides an extensive examination of Catesby’s publication within the twelfth chapter of The Curious Mister Catesby.

According to Ms. Overstreet, Catesby opted to print the work at his own expense. Fortunately, his friend Peter Collinson, a Quaker merchant and Fellow of the Royal Society, agreed to lend Catesby funds to support the publication. These funds were not sufficient to cover the cost of expert engravers, so Catesby hired professional artist Joseph Goupy to teach him how to etch so that Catesby could work up the plates for his publication himself (N&E;, 155).

In order to ensure that enough copies of the work would be sold to justify the cost of its production, Catesby solicited subscribers for Natural History. He distributed a prospectus instructing people who wished to obtain a copy of the work to sign up as subscribers (N&E;, 156). The prospectus indicated that he intended to publish the book in parts of 20 plates and accompanying text issued every four months. Subscribers could elect to receive colored plates for two guineas a part or uncolored plates for one guinea per part (N&E;, 159). The prospectus also directed potential subscribers to view his original artwork, which would be featured in the publication, at Thomas Fairchild’s nursery in Hoxton (N&E;, 147).

All told, Catesby’s final version of the “List of the Encouragers” (a list of the work’s subscribers, which, as was customary at this time, are listed within the publication) includes 155 names (N&E;, 159).

Assured that the book would sell, Catesby set about producing the publication, which included not only etching the copper plates and writing the text, but also hand-coloring (maybe not all) the prints as well (N&E;, 158).  Catesby also enlisted a friend, who requested to remain unnamed, to translate the text into French. The final publication included a column of English text alongside a column of French text (N&E;, 13).

For the plates, Catesby used his own watercolors and also borrowed and included illustrations from other artists. For example, Catesby’s depiction of the southern flying squirrel in plate 76 was borrowed from Dutch artist Everhard Kick (N&E;, 150-151). Artists Georg Dionysius Ehret and George Edwards also contributed drawings to the work (N&E;, 152-153).

Due to the amount of work required for the publication, Catesby was not able to adhere to his one part every four months plan. However, he continued to steadily produce new parts, which were sent to his subscribers. The first four parts of the work were issued in numerous typesettings, as Catesby was apparently cautious about ordering too many copies of each part (many subscribers signed up over the life of the publication, so Catesby was not working with a fixed number of “Encouragers”), which in turn required him to order additional copies of the early parts as new subscribers signed on. By the fifth part, however, we see only one typesetting, indicating that Catesby was confident enough in his sales that he ordered sufficient quantities to meet demand (N&E;, 160-163).

In 1743, the last part of volume 2 was presented to the Royal Society. Four years later, in 1747, the appendix, consisting of an additional twenty plates and text, was presented, bringing the first edition to completion (N&E;, 158). Approximately 180-200 copies were produced, only about 100 of which survive. There are only a few known perfect copies of this first edition, and of these, only the Smithsonian Libraries’ copy (which is freely available in BHL) contains “all three pieces of ephemera relating to the production of the work” (N&E;, 165).

A second edition of Natural History was produced by George Edwards in 1754, five years after Catesby’s death in 1749. This edition is identical to the first, and many copies even include leftover printed sheets from the first edition. The plates for the 2nd edition were produced using Catesby’s original copper plates, but the coloring tends to be brighter than those completed by Catesby himself (N&E;, 166-168). The 2nd edition is freely available in BHL thanks to the Missouri Botanical Garden.

A 3rd edition was published in 1771 by bookseller Benjamin White. This edition is made up of completely reset text and the Linnaean binomials have been added where available. While the edition did use Catesby’s original copper plates, the plates from the 3rd edition are significantly more brightly colored than those of the first edition (N&E;, 168-169). The 3rd edition is freely available in BHL thanks to the University Library at the University of North Carolina, Chapel Hill.

All of the plates from all three editions are available in the BHL Flickr. Thanks to BHL citizen scientist Michelle Marshall (also the curator of BHL’s Instagram), all plates from all editions have been tagged with the common, given and currently accepted scientific names for each species. The Curious Mister Catesby, which includes a species list by James L. Reveal in the book’s appendix (N&E;, 331-341), was used to verify the current accepted name for each species. This not only allows you to search Catesby’s illustrations by taxonomic name, but it also allows us to compare the differences in the illustrations across editions. To compare illustrations across editions, search BHL’s Flickr photostream by BHLCatesby AND “[scientific name]”, inserting the scientific name of a species depicted by Catesby in the brackets where indicated. 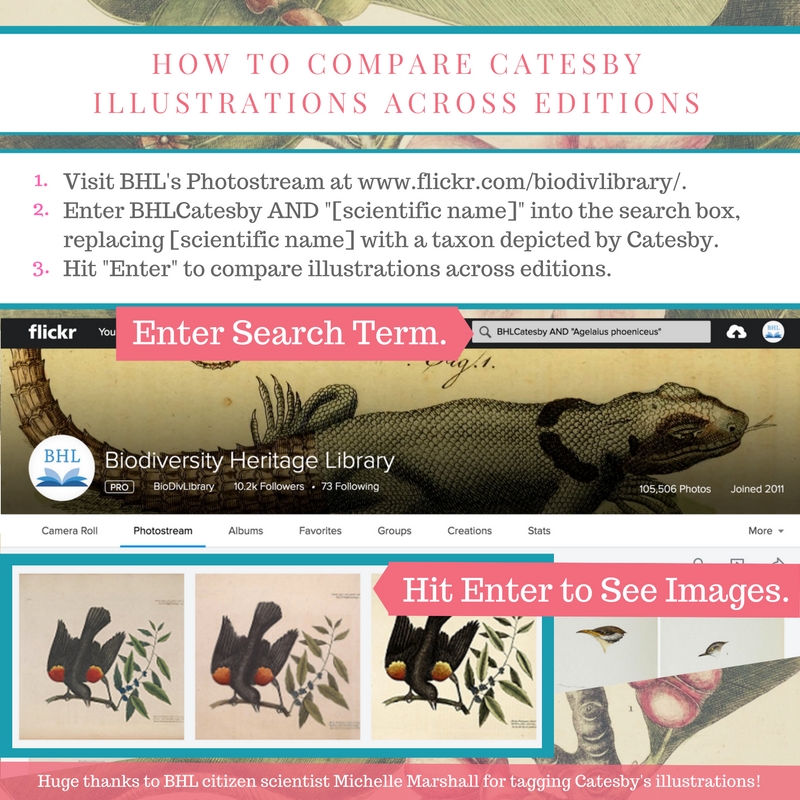 Catesby’s work, and particularly his illustrations, are significant for a variety of reasons. As the first fully illustrated book on the flora and fauna of North America, this book was the first introduction for many Europeans to much of the biodiversity of the New World. Beyond this, Catesby’s work was a significant resource for Carl Linnaeus, whose binomial system for naming plants (which he introduced in print with his Species Plantarum in 1753) and animals (applied in his Systema Naturae, 1758) is still used today (N&E;, 189).

Linnaeus cited Catesby extensively in Species Plantarum and Systema Naturae, showing that Natural History enhanced Linnaeus’ understanding of many species. 131 of the 187 plants depicted by Catesby were cited by Linnaeus in Species Plantarum (N&E;, 201). Additionally, Linnaeus referenced Catesby 139 times in Systema Naturae (N&E;, 254-255). For some of these references, Catesby was the sole source of information for Linnaeus on a given species, and Catesby’s illustrations serve as the type for several of Linnaeus’ species names. In Species Plantarum, for example, 17 of Linnaeus’ species entries cite only Catesby, while Catesby’s plates serve as the type for 34 of the species in that work (N&E;, 201). For 52 of the species entries in Systema Naturae, Catesby was Linnaeus’ only reference (N&E;, 255).

The Natural History of Carolina, Florida, and the Bahama Islands represents a milestone in the cultivation of natural history knowledge. We are indebted to this “ingenious” naturalist Mark Catesby who dedicated his life to capturing and describing the biodiverse wonders of the New World. What a wondrously beautiful and curious world we live in. 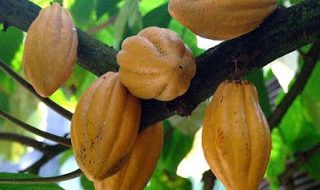