This is the second in a 4 part joint blog series by the Field Book Project (FBP) and the Biodiversity Heritage Library (BHL), showcasing examples of digital connections between museum specimens, field book catalog records, and the resulting publications.

Documentation and specimens from expeditions often end up separated when participants return to their home institutions. The materials’ connections are sometimes inconsistently recorded. Resulting publications can suffer the same fate. These blog posts are snapshots of how these materials are being reunited virtually, through the ongoing work of BHL, FBP, and National Museum of Natural History (NMNH).

The first example of this online reunion is the Biological Survey of Panama, 1910- 1912. This was an amazing survey, conducted before the completion of the Panama Canal. Panama had not yet been fully surveyed; scientists recognized the potential lost opportunity, if the country was not studied before the Canal irrevocably altered the landscape. Smithsonian and affiliated staff who worked on the survey also developed an ongoing interest in the area as a site for long term collecting and research. This eventually resulted in a relationship with the research station on Barro Colorado Island, now known as Smithsonian Tropical Research Institute. Yet, if one looks for publications from this important survey, frequently one must read a portion of text to find the relationship.

When cataloging field books that result from an expedition, the Field Book Project creates an Enhanced Encoded Archival Context catalog record to describe the expedition. The records are designed to provide official and variant names for a survey, major dates, participants, locations, and overall description of work completed. Details vary depending on available information. These specifics enable researchers to locate publications, field notes, and images of specimens collected during an expedition, even though the connection is not always explicitly stated in records.

By knowing who collected, where, and when, we were able to find records for field notes, publications, and specimens for the Survey of the Panama Canal. The Field Book Project’s item level cataloging facilitated the location of field notes from 5 of the 8 leading participants–several of whom were not employees of the US National Museum. We found several examples of digitized publications from original collectors in BHL, in spite of the fact they sometimes appeared a decade after the fieldwork occurred. These details also enabled the locating specimen images, like the one pictured above.

This is by no means an exhaustive search, but the ease with which these were found is heartening. Resources from expeditions like this are frequently documented only in paper or institutional memory. Publications out of copyright have the chance of being digitized by one of several institutions, but the online presence and availability of specimens and field notes (by nature of their uniqueness) requires additional care, time, and expense that many institutions may not have available. We at the Field Book Project are proud to demonstrate how these pieces can be reconnected online. Stay tuned for more expedition highlights. 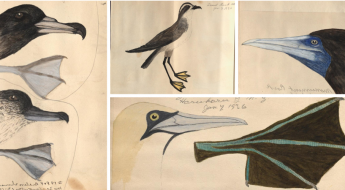