The United Society of Believers in Christ’s Second Appearing, a religious sect commonly referred to as the Shakers, was founded in 18th-century England from a branch of the Quakers. Along with other newly formed devotional groups, they soon immigrated to colonial America. There they established as their economic foundation a variety of cottage industries that thrived throughout the 19th and into the early 20th centuries. Now known mostly for wonderfully simple architecture, austere but beautifully designed furniture and such functional objects as nesting oval boxes and baskets, members of the Shaker communities also once had booming garden and seed businesses. Their labor-intensive methods of working inevitably came to be overwhelmed by competition from industrial manufacturing as well as the problem of ever-shrinking membership, celibacy being one of their central tenets.

The first fully organized Shaker community was New Lebanon in New York; by 1789, two years after its formation, the members cultivated seeds as a cash crop. This was the second earliest “company” to sell seeds in America. David Landreth & Son of Philadelphia was the first, in 1784, and that business traded back and forth with the Shakers. Another early dealer was Grant Thorburn in Philadelphia who wrote about the difficulty of obtaining seeds of good quality.
Other Shaker settlements, or “families,” soon followed in the seed-production business, including Watervvliet, New York; Hancock, Massachusetts; Enfield, Connecticut; Canterbury, New Hampshire; Alfred, Maine; and South Union, Kentucky, among several others. All were known for the excellence of their products and integrity of their business dealings. Devotion to God was expressed through their work ethic, hand labor and craftsmanship. The selling of goods was meant to raise funds only for needs the Shakers could not supply for themselves.

It is uncertain whether the Shakers were the first to put their seed products in small paper envelopes or packets, but they were the first to popularize their use. The Shaker Brothers printed millions of them on their presses, while the Sisters performed the labor of cutting, folding and pasting the papers. While believing in partnership in work and equality of the sexes, occupations tended to fall along traditional gender lines. The Brothers tilled the fields while the Sisters picked, sorted and packaged the seeds and herbs.

The Shakers were also early adopters of incorporating gardening manuals in their catalogs. Charles Crossman wrote ones in 1835 and 1836 for Mount Lebanon, Pittsfield and Watervilet, directing the wholesaler or the individual purchaser how best to plant the offered seeds. Instructions for storing and cooking bounties from the gardens were also sometimes given. Vegetables dominated the products but herbs and flowers as well as grass also appear in the lists. Crossman later left the Shakers and established his own company in Rochester, New York, which was just beginning to become the thriving horticultural center in the country.

As the Shaker seed business in the United States grew from 1840, printing firms outside of the communities were employed to keep up with demand. Correspondingly, advertisements and the design of the packets, begun first plain with simple chunky block type, were transformed to include the use of color papers and borders and eventually vivid chromolithography.

Following the Civil War, increased competition resulted in the Shakers’ using the word “genuine” in their advertising, as products from the communities were considered to be of the highest quality, their best selling point. They also used various and effective marketing techniques, including seed boxes meant to be displayed on the counters of country stores. The containers had compartments for assorted Shaker vegetable and flower seed packages, with a hinged lid to be propped open to display a broadside detailing the contents within, and a chromolithographic image of a bountiful harvest, promising the purchaser a similar reward.

Other surviving ephemera record the once-thriving industry of seed, herbal, food, and medicinal products from the Shakers. Along with seed catalogs and the packets, mailing tags and envelopes, broadsides, receipts, invoices, billheads, and labels, give testament to their industry. Product labels include currant, grape, wild cherry, and blackberry wines. Far from being abstinent (except in the matter of sex), the Shakers made at least fourteen varieties of wine as well as distilled spirits. The religious group in their various communities was also at the forefront of selling medicinal herbs in the United States.

The changing world and market forces caused the Shaker seed industry to gradually peter out at the beginning of the 20th century. Increasing industrialization, growth of urban centers with ease of shipping and mailing to formally isolated villages, and overwhelming production from big companies, particularly in Philadelphia and Rochester, eliminated the communities’ wagon and sleigh seed routes for trading. With their firm spiritual beliefs and practices, the Shakers were not very competitive against aggressive business tactics.

At their peak in the mid-19th century there were about 6,000 “Shaking Quakers” so named because of their ecstatic behavior during worship services. Today, Sabbathday Lake Shaker Community, founded in 1783 in Maine, is the sole active survivor of the religion. A tree farm, an apple orchard and vegetable gardens are maintained, and hand-set printing is still practiced. The library there holds ephemera such as account records, recipes, catalogs and 1,380 labels printed by Shakers for their own products. They are living testament to the Shakers’ influence on the American seed and nursery industry and their permanent place in horticultural history—the early development of the new business, innovative techniques in marketing and education as well as the propagation and introduction of new varieties. The Sabbathday Shakers still sell herbs, and their catalog is online. 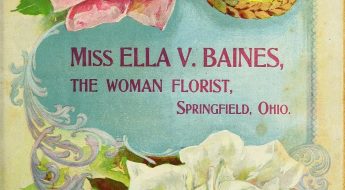 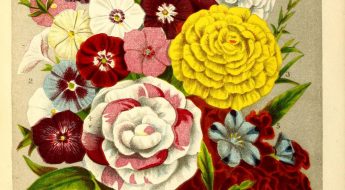 « Previous post
What’s Up with Seed Catalogs in BHL?
Next post »
Revolutionizing the Garden Industry with Art: Part Two