Have you ever stumbled across a caterpillar and wondered what kind of adult moth or butterfly it would metamorphose into?

Short of catching the caterpillar and actually observing what adult it becomes, this answer might be harder to come by than you might think. Most taxonomy and identification has been performed on the adults of various Lepidopteran species, and there are still many species whose caterpillar forms are not readily known.

This is particularly true for many Australian species whose early life stages remain a scientific mystery.

Dr. Don Herbison-Evans hopes to shed some light on these Australian larval mysteries through the website Australian Caterpillars and their Butterflies and Moths, which is hosted by the Coffs Harbour Butterfly House in New South Whales, Australia.

Dr. Herbison-Evans has professional experience in a variety of scientific disciplines, including information technology and computer science, astronomy, and chemistry. His interest in entomology, however, was sparked when he emigrated from the UK to Sydney to start his academic career in the 1960s. He and good friend Dr. Stella A. Crossley (who also emigrated from the UK to Melbourne around the same time to lecture in the Psychology Department at Monash University) were fascinated by the number of caterpillar species they found in their gardens.

“I remember taking one beastie to the enquiries desk at the Australian Museum, and asking what species it was,” recalled Don. “The lady there laughed, and then explained that most of the taxonomy of Australian Lepidoptera was done by entomologists at the British Museum on dried adult specimens sent back to the UK by Joseph Banks and other British explorers, so the entomologists had no idea what the early life stages, such as the caterpillars, were like.”

Thus, Don and Stella started photographing the caterpillars they found and rearing them into adults to discover their mature counterparts. In an effort to share what they discovered, they wrote a manuscript entitled 100 Common Australian Caterpillars, but unfortunately, publishers’ interest in caterpillars in the 1970s was virtually nonexistent. So Don and Stella shelved the manuscript.

And then, some twenty years later, along came the Internet.

“We were encouraged as univerisity staff to put potted biographies of ourselves on the web for students to know more about us, and of course we included a note in ours that we were interested in caterpillars,” explained Don. “We then got increasing numbers of people sending descriptions and photos of caterpillars asking what they were. So we said: ‘OK let’s just put our book on the web.'”

And so Australian Caterpillars and their Butterflies and Moths was born. The website contains webpages for over 3,600 Australian Lepidopteran species (having grown from an original 100). These webpages include descriptive information about the species as well as, where available, images of the adult and caterpillar forms. The pages are grouped according to family, and these pages are linked via a single page for moths and another for butterflies.

The Biodiversity Heritage Library serves as an excellent source of information for the website.

“BHL has enabled me to add historical richness to my popular descriptions of the biology of the Lepidoptera of Australia,” stated Don.

Using BHL everyday, Don searches for references to species of interest in BHL using our taxonomic name finding tool. If this does not yield results, he searches the OCR of likely journal issues for genus or species names. He then links these pages to relevant content in the website. Where illustrations are available in BHL, these are also uploaded to the corresponding species pages. These illustrations, which offer an interesting juxtaposition to modern photographs, are, in fact, Don’s favorite feature on BHL.

In addition to information about specific species, the website also provides some pretty incredible facts about caterpillars. For example, did you know that caterpillars have thousands of muscles, whereas humans only have about 500? Or that the female moths of the Australian species such as Teia anartoides have no wings, and the species disperses by the young caterpillars making an open gossamer sail out of silk, and sailing away on it in the wind?

The website has become an incredible resource for those interested in exploring Australian Lepidoptera. Don particularly hopes that it will help spark an interest in these insects among younger audiences.

“Our idea in the webpages is to help, particularly young Australian people, understand and value the unique entomological heritage to which they are heirs, and to foster an understanding of how to preserve that heritage for future generations,” Don explained. “The webpages try to be chatty and intriguing to, say, an intelligent 12 year old, but to include enough technical information to tempt them deeper into the ecology and taxonomy of Australian Lepidoptera. With the help of the Biodiversity Heritage Library and Wikipedia, we are able to link the current descriptions of the biology of the species to the original descriptions from two or more centuries ago and to biographies of their authors who can be seen to have been real people, who too were intensely interested in Australian fauna. I think this helps establish the idea in our readers that these organisms have perhaps as much right to live in Australia as they do, and that our living biological heritage can be preserved and maintained, just as [BHL] preserves our literary and scientific heritage.”

We think the website is well on its way to achieving this goal. After all, what young person wouldn’t want to learn more about a caterpillar that can fire fecal pellets from its anus?

Thanks very much to Dr. Herbison-Evans for sharing his work and use of BHL with us. Be sure to explore Australian Caterpillars and their Butterflies and Moths today.

Do you use BHL regularly for your work? Want to be featured on our blog? Send a message to feedback@biodiversitylibrary.org. 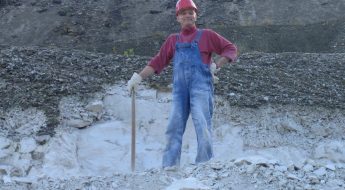 BHL and Our Users: Joachim Ladwig 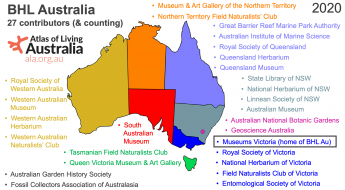