This post was originally published on the Chicago Botanic Garden, Lenhardt Library website in November 2014. It is authored by (now retired) Edward J. Valauskas, Curator of Rare Books. 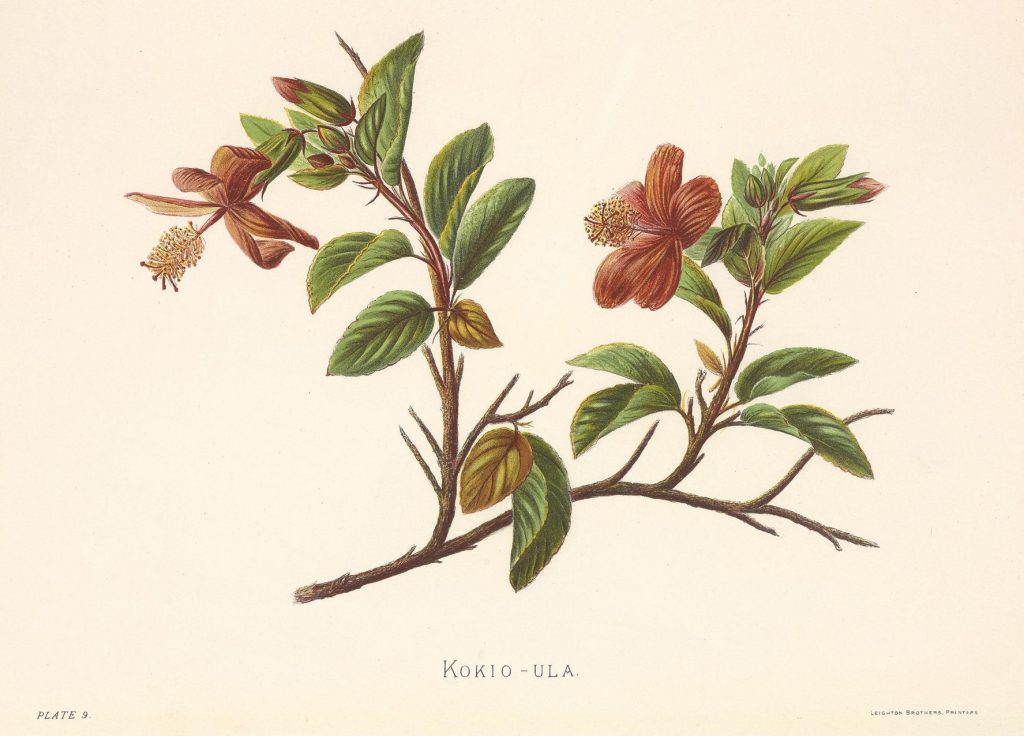 How does a young woman create the most important record of Hawaiian flowers in the nineteenth century? Who helps her identify plants and find a London publisher? Why does she leave New Zealand for Niihau, the Forbidden Island? Thanks to a magnificent book in the Rare Book Collection of the Chicago Botanic Garden Library (and a little research), we can answer these questions.

With 44 delightful chromolithographed plates, Indigenous Flowers of the Hawaiian Islands is no ordinary book. Its illustrations introduced the world to an exotic, endemic, and vanishing flora. Indigenous Flowers provides a marker to measure the impact of humans on the fragile ecosystem of two Hawaiian islands, yet another signal of the Anthropocene epoch. Isabella McHutcheson Sinclair (1840–90) was probably the most unexpected ambassador for plant conservation. Her breadth of botanical experiences in the Pacific, in both New Zealand and the Sandwich Islands (better known today as Hawaii), gave her a particular vision to recognize the effects of humans on local flora and fauna. 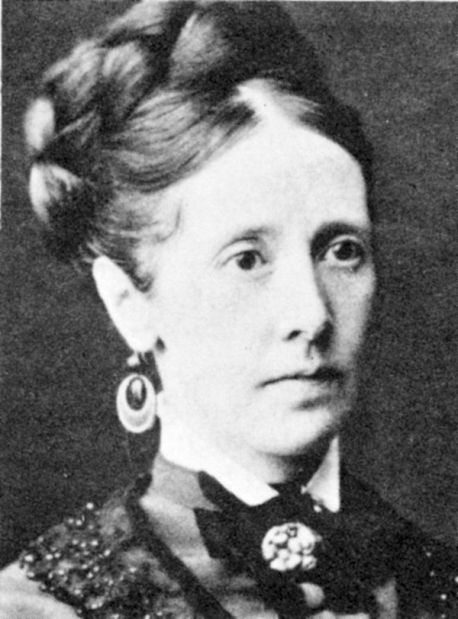 Isabella was born in Scotland, and migrated across the globe with her family to Canterbury, New Zealand, in 1861. A little more than 16,000 people of European descent resided in Canterbury at the time, making it the second most populous city in the country. Her father, William McHutcheson (1810–1905), moved to this faraway locale thanks to the energetic efforts of his sister Elizabeth McHutcheson Sinclair (1800–92). Better known as Eliza, she managed family prospects successfully, in part because her husband and son perished at sea in 1846.

After several decades in New Zealand, Elizabeth decided to try her luck elsewhere, moving to British Columbia in Canada in 1863. Eliza and her family found that the natives of British Columbia were quite different from Maori, and the mountainous, wooded terrain was much more difficult to clear and prepare for settlement and agriculture. Eliza decided to abandon Canada for California, but a friend recommended the Sandwich Islands instead.

In September 1863, Elizabeth Sinclair, et al. arrived in Honolulu via a circuitous route on the ship Bessie, starting in Vancouver and stopping in Los Angeles. Moving with speed, Eliza bought the island called Niihau for $10,000 from Kamehameha V (1830–72), the fifth monarch of Hawaii. Niihau, measuring about 70 square miles (or less than a third of Chicago’s 228 square miles), became the base for the expanding Sinclair family, including Isabella who married her cousin Francis.

Isabella and Francis worked with the Sinclair clan on Niihau, but decided to settle on the southern shore of the adjacent island of Kauai in Makaweli. Kauai is a little more than 17 miles southwest of Niihau, so Francis (known also as Frank) could easily move between family duties on the islands. Isabella, fortunately for botanical and artistic posterity, had the time and inclination to explore the vegetation of Kauai and Niihau. 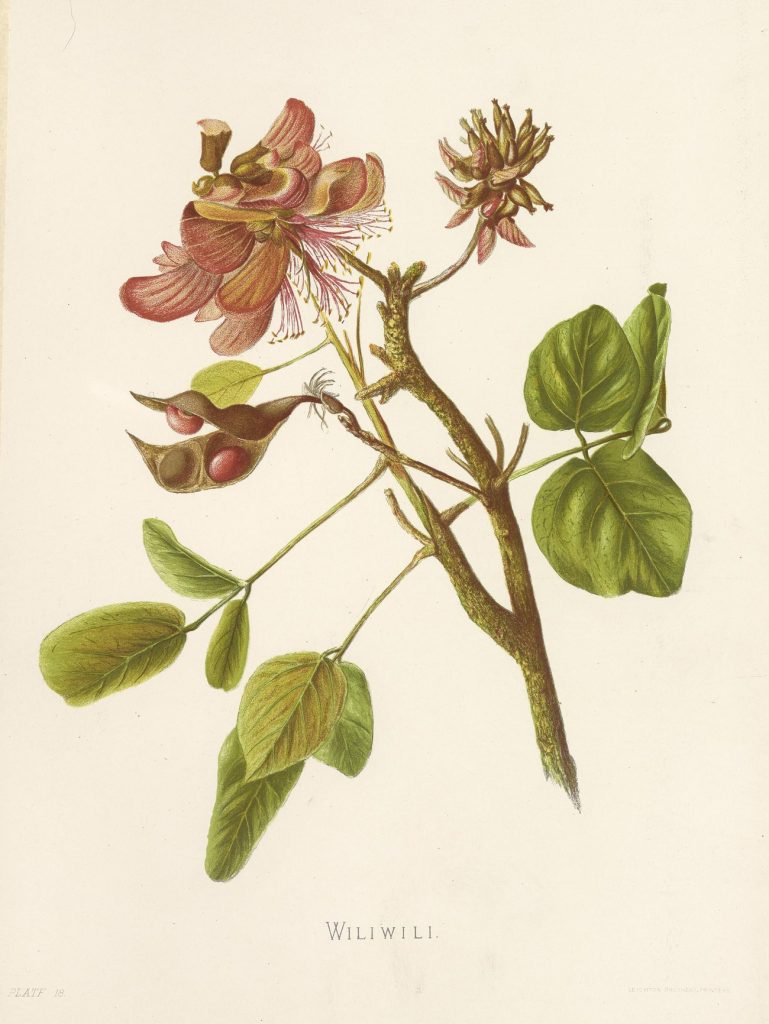 The Sinclair family was respected by natives on both islands, since Eliza, the matriarch, was recognized as a “chiefess.” Isabella, via the locals, was able to secure a great deal of information about her botanical discoveries, including vernacular names and medicinal properties. She explored extensively on Kauai, including Waimea Canyon, some 10 miles long and nearly 3,000 feet deep. Isabella used her specimens to create delicate and detailed watercolors for each plant. She organized her botanical information with notes on habitat and flowering times.

Isabella noticed that many of her Hawaiian flowers had similarities to those she found in New Zealand. She decided to take a bold step and contact the world’s expert on the Pacific flora, Sir Joseph Dalton Hooker (1817–1911). Hooker, director of Kew, was the author of the first descriptions of New Zealand’s flora in Flora novae-zelandiae (1853–55). Hooker collected specimens as a member of the British expedition to the Southern Ocean aboard the HMS Erebus between 1839–43. He quickly recognized the diversity of floras of different localities in the Pacific, but also saw similarities. His phytogeographical speculations were the first to trace botanical links to southern Africa, Asia, and South America.

In Flora novae-zelandiae, Hooker guessed that geology had some role to play in the botanical similarities of widely dispersed plants:

“Beyond the bare fact of the difficulty of accounting by any other means for the presence of the same species in two of the islands, there appeared nothing in the botany of the Antarctic regions to support or even to favour the assumption of a double creation, and I hence dismissed it as a mere speculation which, till it gained some support on philosophical principles, could only be regarded as shelving a difficulty; whilst the unstable doctrine that would account for the creation of each species on each island by progressive development on the spot, was contradicted by every fact.

It was with these conclusions before me, that I was led to speculate on the possibility of the plants of the Southern Ocean being the remains of a flora that had once spread over a larger and more continuous tract of land than now exists in that ocean; and that the peculiar Antarctic genera and species may be the vestiges of a flora characterized by the predominance of plants which are now scattered throughout the southern islands.”

Hooker found that the flora of New Zealand was largely endemic, by his calculations two-thirds “peculiar” (his description) to the islands, while one-third related to Australia or South America. A more recent calculation, in the first volume of Harry Howard Allan’s masterful Flora of New Zealand, finds that 80 percent of the plants are endemic. 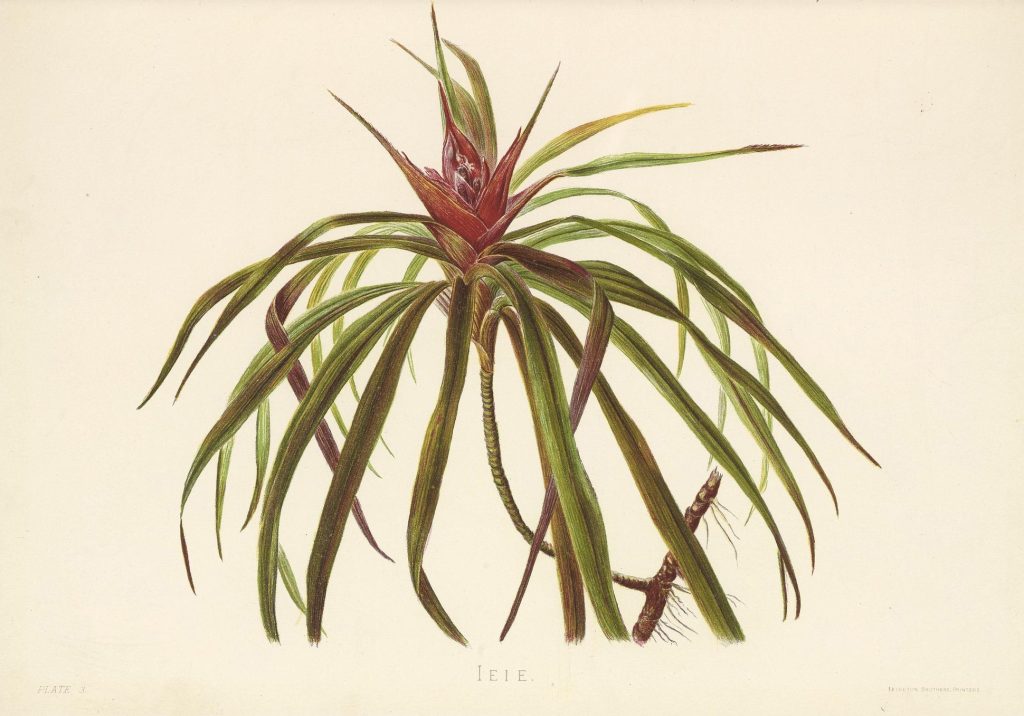 Hooker needed more data to confirm his notions of a primeval landmass, which today we know as Gondwana. His duties at Kew certainly prevented him from carrying out more field-work, so he was dependent on his colleagues and talented amateurs, like Isabella in Hawaii. Hooker knew the risks of depending on citizen scientists. In Flora novae–zelandiae, he issued a cautionary reminder:

“The very many aspirants to a knowledge of science whom I have had the pleasure of knowing in the Colonies, though well educated in the ordinary acceptation of the term, have never been trained to habits of observation, or of reasoning upon what they read in the book of nature, nor have they been grounded in the elements of natural science; they are hence prone to rely for information on these speculative subjects (which they seek with avidity) upon a class of works that are, with very few exceptions, by authors who have no practical acquaintance with the sciences they write about, or with the facts they so often distort.”

Imagine Hooker’s surprise when he first heard from Isabella! She sought his taxonomic advice on the scientific names of her discoveries in the northern outposts of the Sandwich Islands. Isabella provided exquisite details on the occurrence of each plant, plus a bonus of amazing watercolors. She was no ordinary observer of flowers, thanks to her New Zealand experiences and connections to both the Maori and Polynesians.

Hooker encouraged Isabella to publish her watercolors and observations in a book on flowers of Hawaii. She must have been both flattered and embarrassed to have one of the greatest botanists on the planet recognize the value of her efforts. Finally in 1884, Isabella and her husband made the long voyage to London to put her findings into print as Indigenous Flowers of the Hawaiian Islands.

Published by Sampson, Low, Marston, Searle, and Rivington in London, Indigenous Flowers was also an experiment. It was one of the earliest books to use “perfect binding” which is anything but perfect. Probably in an effort to reduce costs for the volume, letterpress and chromolithographic plates in Indigenous Flowers were glued rather than sewn to the binding. Given the small press run, this perfect binding has led to copies losing pages and plates over time, probably encouraging some extant copies to move to the guillotine for print merchants. Four years after the appearance of the London edition in 1885, Houghton in Boston published an American version (which is even scarcer than the rare London edition). Hooker pressed Isabella to write as an introduction to her work some impressions of the flora of the islands. With extraordinary prescience, Isabella recognized the fragility of the habitats on her beloved islands:

“The Hawaiian flora seems … to grow in an easy careless way, which, though pleasingly artistic, and well adapted to what may be termed the natural state of the islands, will not long survive the invasion of foreign plants, and changed conditions. Forest fires, animals, and agriculture, have so changed the islands, within the last fifty or sixty years, that one can now travel for miles, in some districts, without finding a single indigenous plant; the ground being wholly taken possession of by weeds, shrubs, and grasses, imported from various countries.”

According to the National Tropical Botanical Garden, the Hawaiian Islands are home to more than 1,300 endemic plant species, of which 100 are extinct and 273 are threatened or endangered. Isabella Sinclair recognized this problem 130 years ago in Indigenous Flowers of the Hawaiian Islands. Her book provides a standard for measuring the flora of those islands as well as providing an artistic expression of the beauty of these special plants. 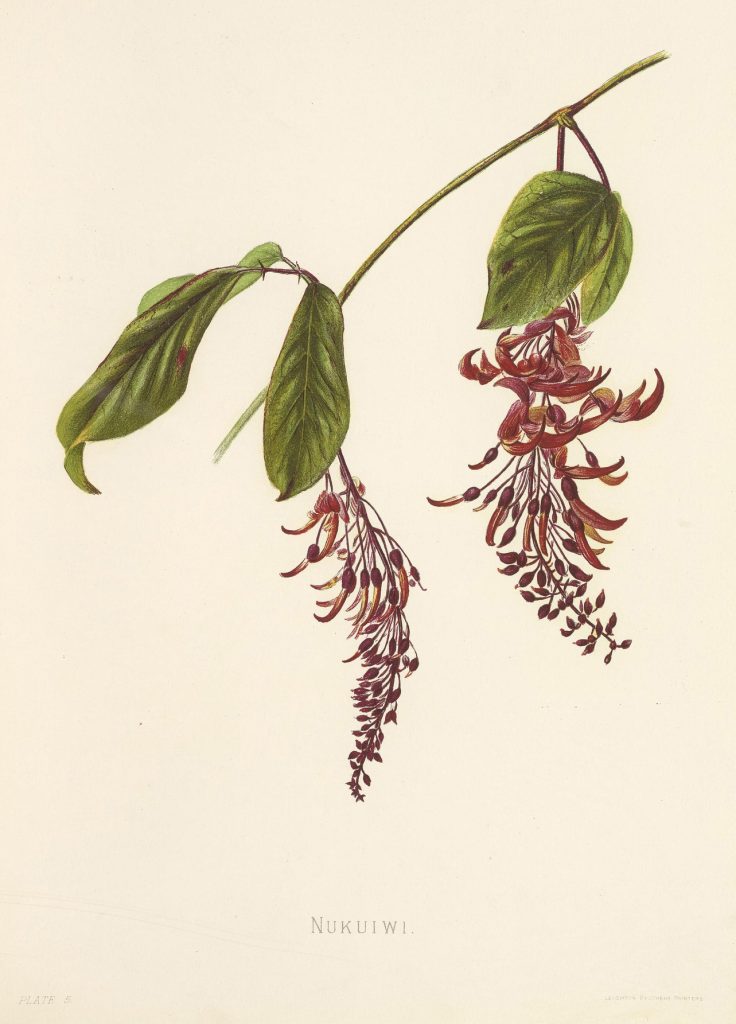 Harold St. John (1892–1991), professor of botany at the University of Hawaii, analyzed the content of Indigenous Flowers. His resulting paper, published in 1954 in the journal Pacific Science, found that Isabella described in Indigenous Flowers 37 indigenous species. Of these, 23 were native to Kauai but not Niihau, while 15 were found on both islands.

Mark Twain visited Hawaii for several months in 1866 as a reporter for the newspaper The Sacramento Union. He was quite impressed by the beauty of Hawaii and the lives of the natives. Decades later, he wrote:

“For me its balmy airs are always blowing, its summer seas flashing in the sun; the pulsing of its surf is in my ear; I can see its garlanded crags, its leaping cascades, its plumy palms drowsing by the shore, its remote summits floating like islands above the cloud-rack; I can feel the spirit of its woody solitudes, I hear the plashing of the brooks; in my nostrils still lives the breath of flowers that perished twenty years ago.”

Thanks to Isabella McHutcheson Sinclair’s Indigenous Flowers of the Hawaiian Islands, we can experience that magical world, battling for survival.

Edward J. Valauskas was the Rare Book Curator at the Lenhardt Library of the Chicago Botanic Garden. He is now retired. 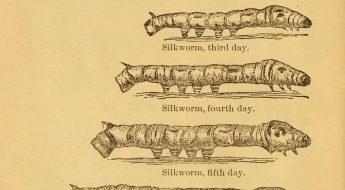 « Previous post
Her “Diversion”: The Gardening and Botanical Pursuits of Mary Somerset, Duchess of Beaufort
Next post »
Transcribe Field Notes by Female Naturalists with the #HerNaturalHistory Transcription Challenge