Last week the BHL Librarian and Technical Staff met at Harvard University in Cambridge, Massachusetts, for one of our invaluable staff meetings (our last face to face meeting was about one year ago right after the BHL Chicago Life and Literature Conference.)  These meetings are always lively and packed full of agenda items that we generate during our monthly teleconference calls…and usually a memorable meal or some cultural event are also included! After each of these meetings we return to our home libraries laden down with an armful of tasks to complete within a specific timeframe (which we try to stick to!). Check back soon for a post about the Meeting.

A month ago one of our librarians, Matthew Person of the MBLWHOI Library in Woods Hole, Massachusetts, was given the unique opportunity to speak about the BHL to Science Historians and digital media specialists who were meeting in the other Cambridge: that’s Cambridge University in England! Matt was attending the 9th Digital History and Philosophy of Science Workshop at Cambridge University as a member of the Arizona State University/Marine Biological Laboratory History and Philosophy of Science Program of MBL’s Center for Library and Informatics.

The opening day afternoon of the Cambridge UK conference was themed “If you build it will they come? Mobilizing online Communities for Research.” Matt was asked by Dr. Alison Pearn, who is Associate Director of the Darwin Correspondence Project, if he would give a presentation about BHL’s social media work, our use of crowd sourcing, and games development, all which assist our BHL development. The presentation Matt gave was titled “Building a large digital library and interacting with the World”, and this was just one of a number of interesting presentations made that day by staff of: The Genizah Project (Dr. Ben Outhwaite of Cambridge University), the oldWeather Project (Dr. Philip Brohan of the MetOffice UK), and the Chymistry of Issac Newton Project (Dr. Wally Hooper of Indiana University), to name just a few of about 20 projects and presenters who spoke during the 3 day workshop.

Matt consulted with BHL colleagues Gilbert Borrego, Grace Costantino, Suzanne Pilsk, and Martin Kalfatovic of the Smithsonian Institution Libraries, Diane Rielinger and Cathy Norton of the MBLWHOI Library, Trish Rose-Sandler and Chris Freeland of the Missouri Botanical Garden, and Connie Rinaldo of the Harvard Museum of Comparative Zoology, in preparation for his BHL talk, the first part of which was a concise account of the purpose, history, and function of the BHL. The second part of the talk detailed our working with the tools of social media websites such as facebook, twitter, and flickr, and our daily use of an issue resolution tool informed by our BHL library users called Gemini. Matt also spoke of our thoughts on the development of a mobile device type of game App, which could assist us with scanned text correction, for example.*

The Biodiversity Heritage Library goes beyond being a virtual biodiversity library serving scholars and citizen scientists. Our work on Flickr isolates some of the remarkable corpus of illustrations in the scanned BHL literature, and works with our partner the Encyclopedia of Life to hold flickr tagging events to have the “crowd sourced” community establish appropriate descriptive metadata for the illustrations so that they can be uploaded to EOL species pages. Our work in social media is dynamic, ongoing and developing, and the talk Matt gave at the Digital History and Philosophy of Science Workshop in Cambridge, UK, was well received by scholars and technicians who both use the BHL and have wondered a bit about what’s behind those 39 million+ scanned pages!

The image of a science historian or any scholar working solely in print materials these days is being replaced by dynamic projects that combine digital versions of scanned historic text with the most advanced computational and visualization tools of the day. Many of these tools have been developed by the BHL partner libraries, and many are also being developed by the History and Philosophy of Science community. This work expands dramatically the scope and depth of the study of the history of science.

We asked Matt, who lives near Cambridge, Massachusetts, to comment on these two cities which figured in BHL life this September…named Cambridge…the one in Massachusetts and the other in England. He told us, “Both cities named Cambridge are relatively small in size, but huge in scholarly content; both cities have bucolic riverside settings, and also are on the forefront of knowledge creation, and have been so for centuries.” So it’s quite appropriate that in September 2012 both historic cities named Cambridge figured in the life of the historic and ground breaking Biodiversity Heritage Library!

* BHL is not, at this time, performing any development with gaming Apps, though we are exploring the possibility of doing so one day. 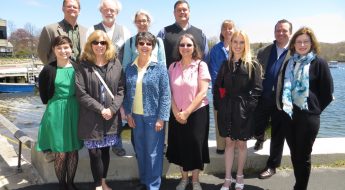