Feathers have been used in fashion throughout history, but the trend became more widespread from the late 18th century when the Industrial Revolution made luxuries more available to the masses. In the 19th century, new technology improved the speed of production and the millinery industry boomed [1]. Hats with feathers became a status symbol coveted by a new mass market and were produced on an industrial scale.

Birds were hunted around the world to supply plumes to centres of fashion such as London and New York. In 1886, American Museum of Natural History’s ornithologist, Frank Chapman, infamously observed on a walk in New York some 40 native bird species on women’s hats, some with an entire stuffed bird attached [2]. Indeed, women were oft blamed for the trend: in The Ibis in 1887 [3], women were pointed to as “the indirect, but real, instigators of this slaughter”. The author continues: “all that can be hoped for is that the freaks of feminine vanity may take some other and less harmful direction.”

The issue also arises in a letter [4] dated 1865 from ornithologist John Gould to Museum Victoria’s first director, Sir Frederick McCoy, who had previously written to Gould asking him to procure bird specimens for the burgeoning museum’s collections. In the letter, Gould ironically writes:

“The Ladies, the Ladies, have however, so stripped us of birds for their bonnets that but few are now in the market and these of course are high priced.” 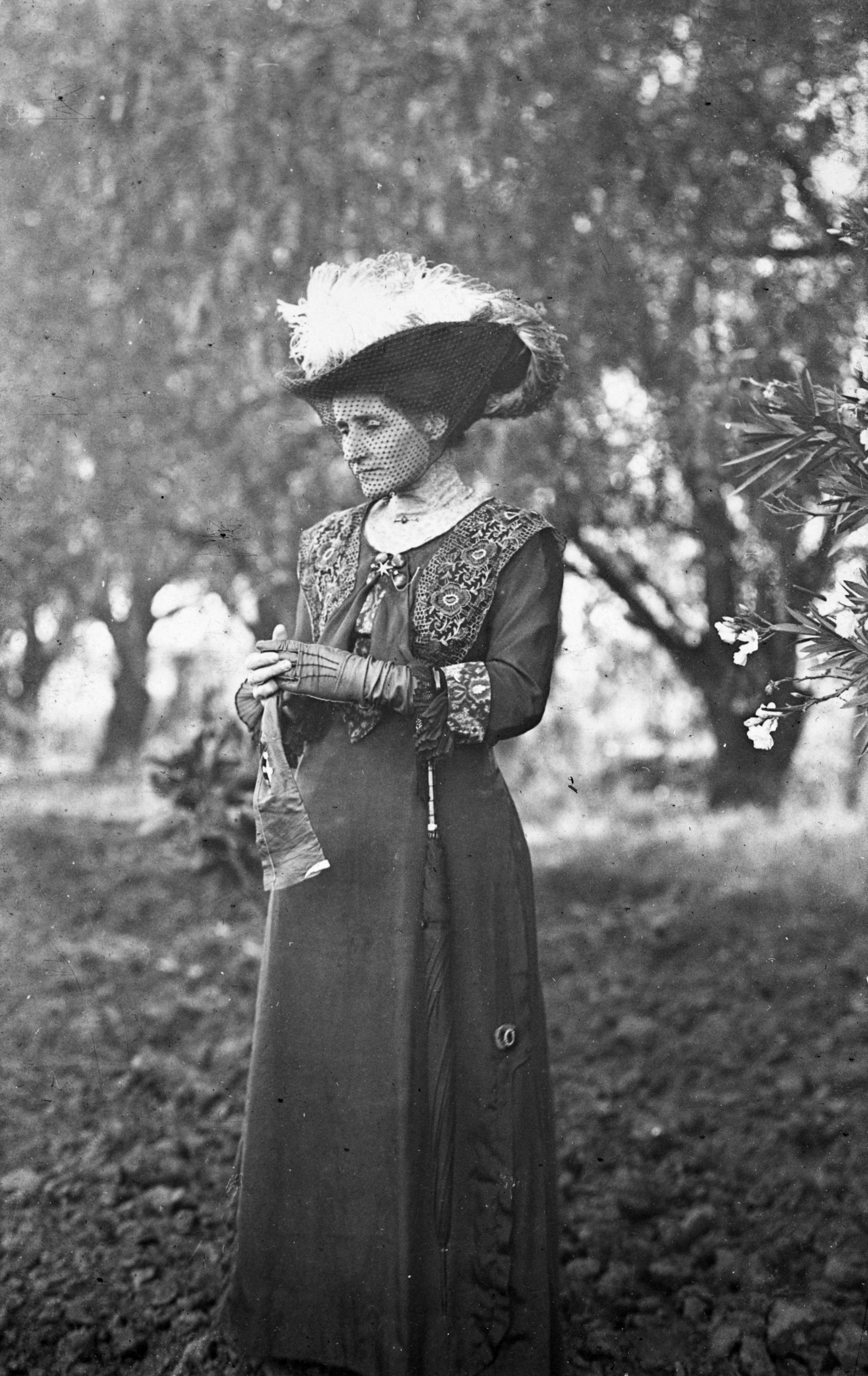 While women were loudly condemned for their role in consuming feathers, they were also instrumental in the campaigns to raise awareness of the devastating effects of plume hunting on bird populations. For instance, in 1896 the American socialite and amateur naturalist Harriet Hemenway and her cousin Minna Hall led a boycott of feathered hats which attracted 900 participants and led to the formation of the National Audubon Society and passage of the Weeks-McLean Law (aka the Migratory Bird Act), which outlawed market hunting and the interstate transport of birds [5].

As documented by Herbert K. Job in his 1905 book Wild Wings [6], at the turn of the 20th century, an ounce of feathers was worth $32—almost twice as much as an ounce of gold. Job states that during 1902, over 1600 packages of heron plumes were sold at just one London auction house:

“A package is said to average in weight 30 ounces. This makes a total of 48,240 ounces. As it requires about four birds to make an ounce of plumes, these sales meant 192,960 herons killed at their nests, and from two to three times that number of young or eggs destroyed. Is it, then, any wonder that these species are on the verge of extinction?” (p.146)

In Australia, egrets, herons, lyrebirds, bowerbirds and emus were amongst the species targeted by plume hunters. 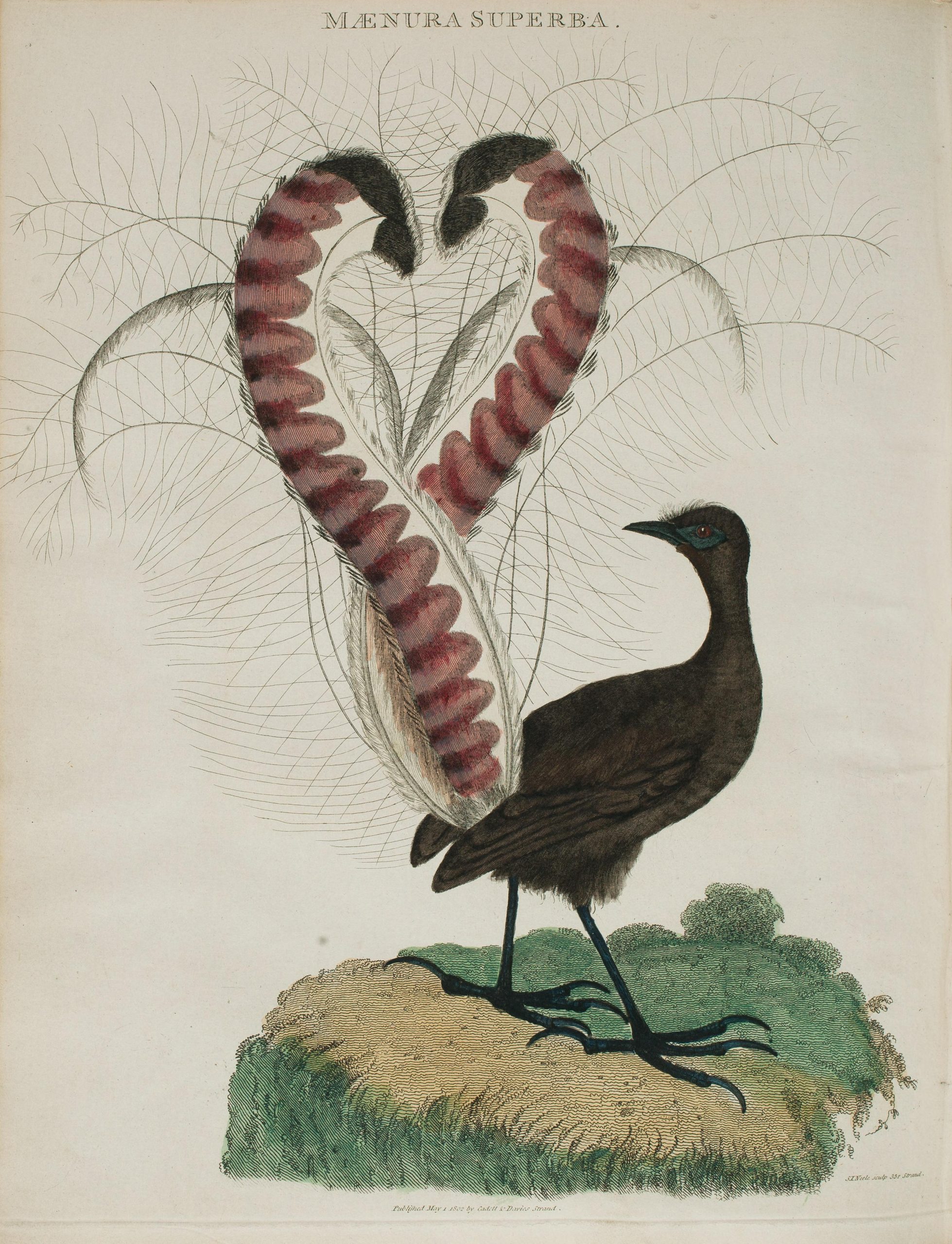 Illustration of a lyrebird from An account of the English colony in New South Wales by David Collins (1804). Contributed in BHL by Museums Victoria.

Lyrebirds are ancient Australian animals: the Australian Museum in Sydney has fossils of lyrebirds dating back around 15 million years [7]. The Lyrebird reportedly came close to extinction in the early 1900s as it was hunted for its ornate tail feathers. In the 1911 publication, Pros and cons of the plumage bill, bird protectionist James Buckland states that “over 400 lyre-birds were killed in one district in a single season to supply the London plumage market” [8].

In 1901, the Australian Ornithologists’ Union (AOU) was founded to promote the study and conservation of the native bird species of Australia and adjacent regions. One of its members, Tom Tregellas, regularly camped out in a large hollow tree trunk over a period of seventeen years in Sherbrooke Forest, Victoria observing and photographing lyrebirds. Noticing a decrease in the population over time, he crusaded for the protection of lyrebirds and legislation was eventually passed to protect the birds.

The rapid decline of several species whose feathers were used in ladies’ fashion were seen during this period, and some bird species were not as fortunate as the lyrebird. The Huia of New Zealand was declared extinct in 1907, and it is also believed that the use of Great Auk feathers for down partially contributed to its extinction [9].

Periodicals, along with books and public lectures, were one of the key means of circulating information and inspiring action around bird preservation at that time. In volume seven of the journal of the AOU, The Emu, two articles by Australian ornithologist Arthur H. Mattingley are published side-by-side. In the first from November 1906 [10], Mattingley recounts a visit to the Murray River where he photographs egret and heron nests. In the second [11], written only a few weeks later, Mattingley returns to the same area and is horrified to discover that nearly one-third of the birds were killed, with the young left to starve in their nests. 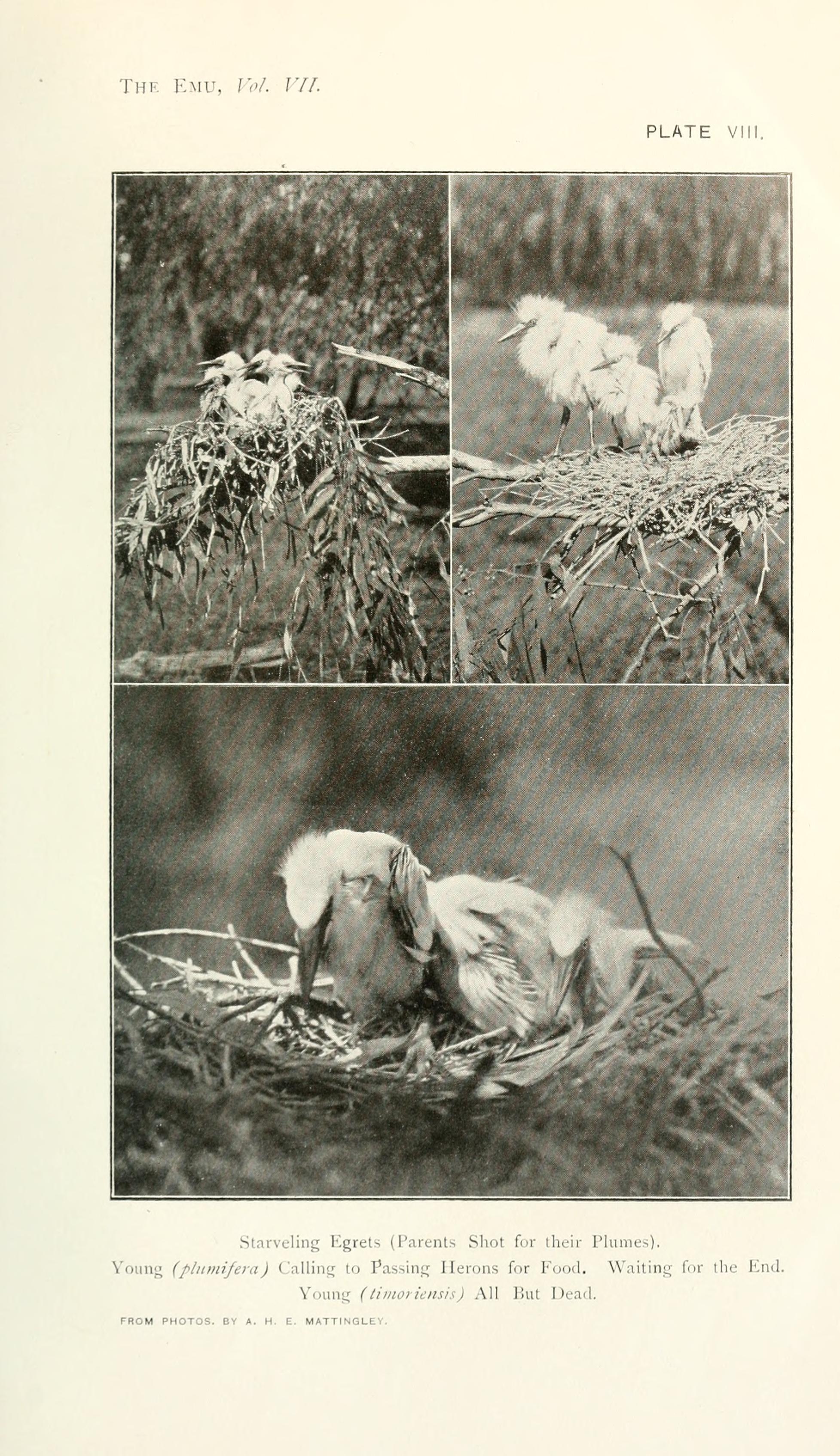 Photographs accompanying the article “Plundered for their plumes” by A.H. Mattingley, in The Emu, Vol.7 (1907). Contributed in BHL by American Museum of Natural History Library.

The second article, Plundered for their plumes, contains vivid photographs that caused quite a stir internationally. These photos are widely regarded as a tipping point in changing attitudes towards the use of feathers in fashion.

In England, the Royal Society for the Protection of Birds (RSPB) posted the photos on billboards and in shop windows, and in 1911 men carrying enlargements of the story patrolled the West End of London to protest the cruelty of wearing feathers. As a result, the story gained attention throughout the UK, as well as in Paris, Amsterdam, Italy, Spain, Denmark, Australia and the United States [12].

From this point on, the interest of amateur ornithologists changed from bird collection to identification. An Australian Bird Book, by John Albert Leach (1911), and Neville Cayley’s What Bird Is That? (first published in 1931) are two Australian publications that reflect this shift. 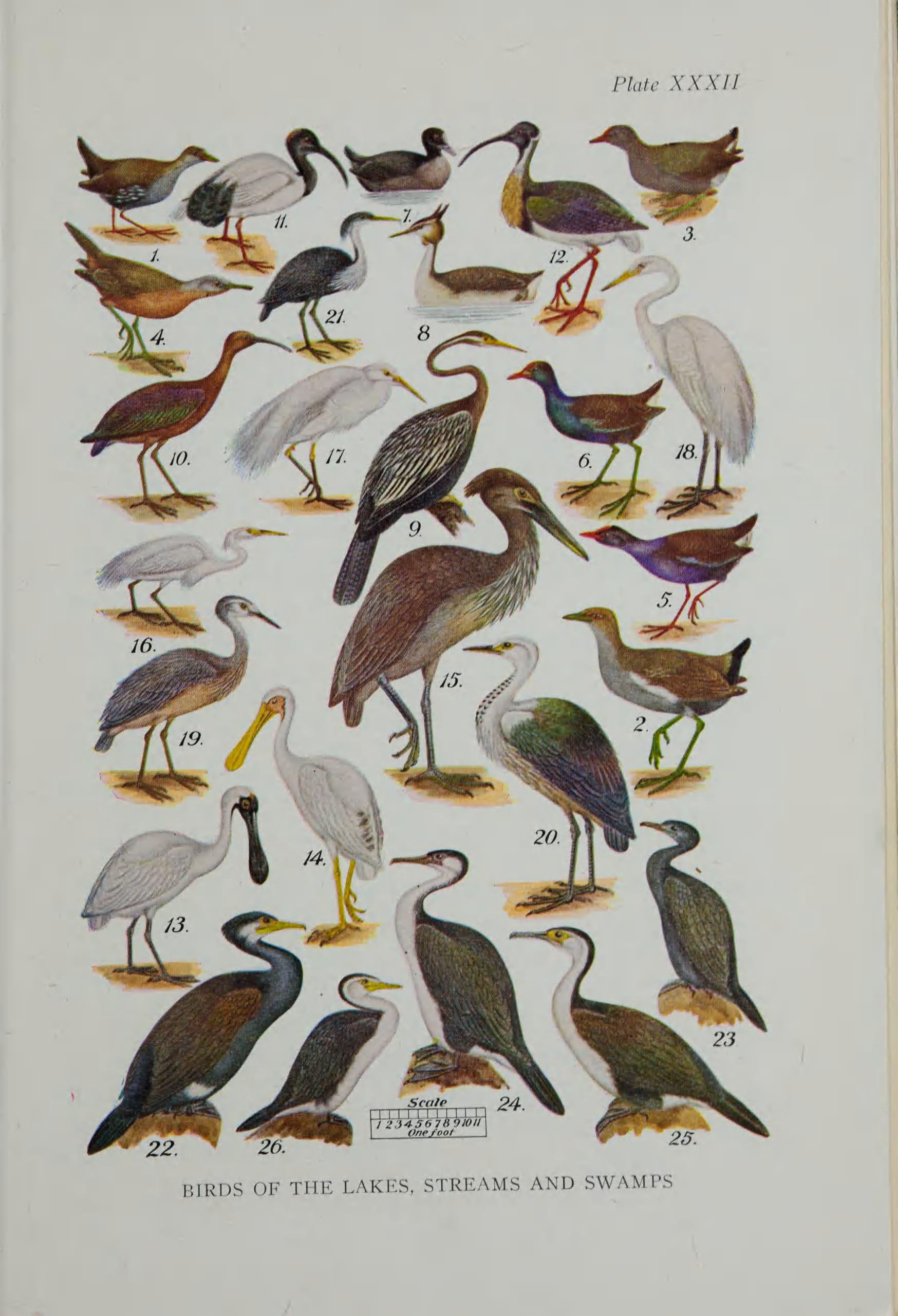 Illustration from What bird Is That? by Neville Cayley (1947). Contributed in BHL by Museums Victoria.

Feathered hats did make a reappearance from the 1930s-1960s, but the decades after this saw hats lose popularity as they were no longer a standard item of women’s daywear. Worryingly, feathers have been making a comeback since clothing adorned with marabou and ostrich feathers appeared in a couture runway show in 2017, and PETA have been campaigning against the use of feathers in fashion ever since. The use of down in jackets is also a contentious issue today, and many major international brands have stopped selling down in favour of high-tech synthetics.

While mass market fashion continues to have serious environmental repercussions, this history shows that wide scale attitudinal shifts around such issues are possible. Efforts on this front, however, need to be widespread and sustained. 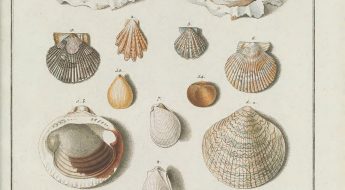 Labillardière and the Botany of the Levant

« Previous post
Exploring the People and Stories Behind the Names: BHL Empowers Research on Taxonomic History
Next post »
Empowering Research on Marine Bioinvasions to Support Conservation of Native Species and Ecosystems