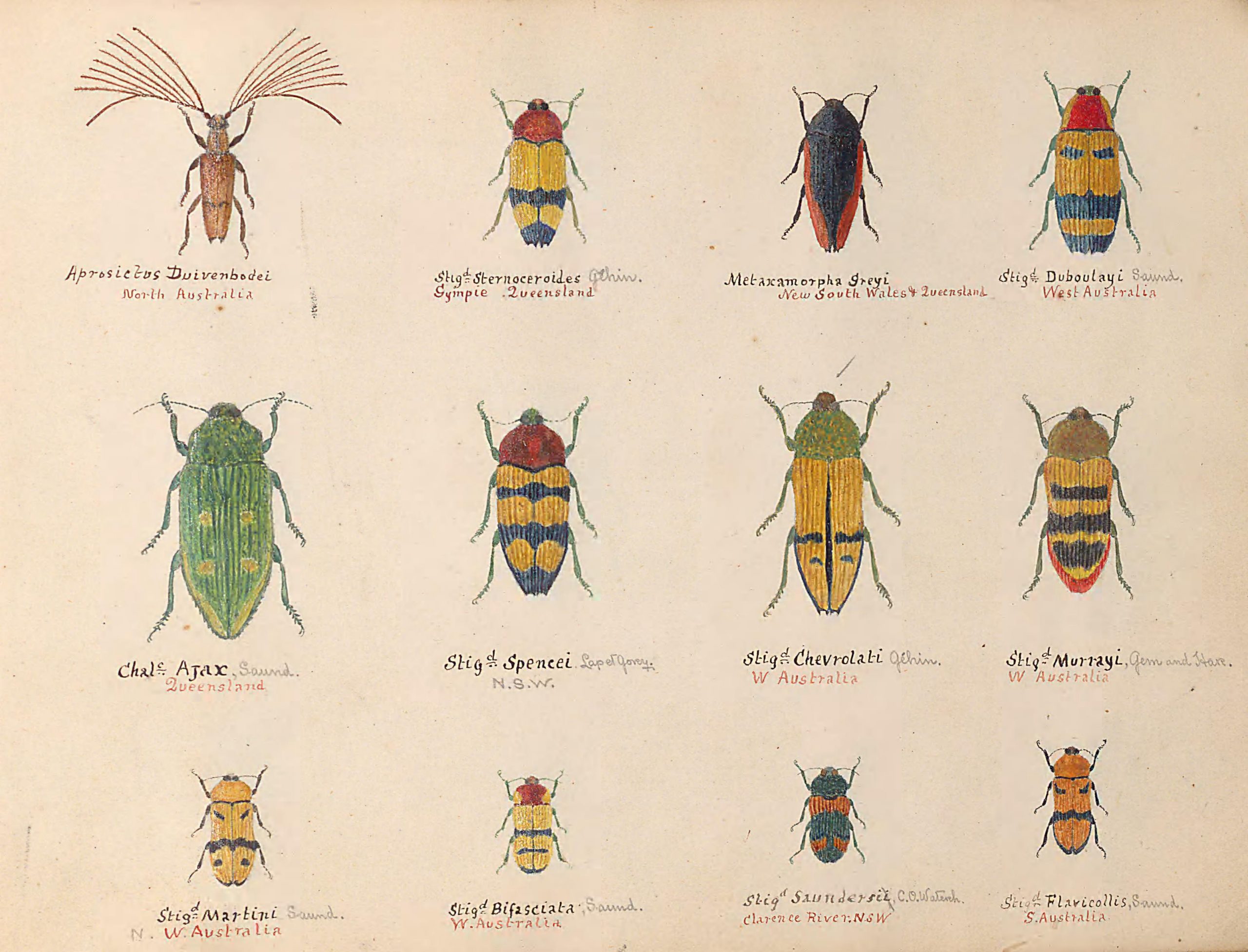 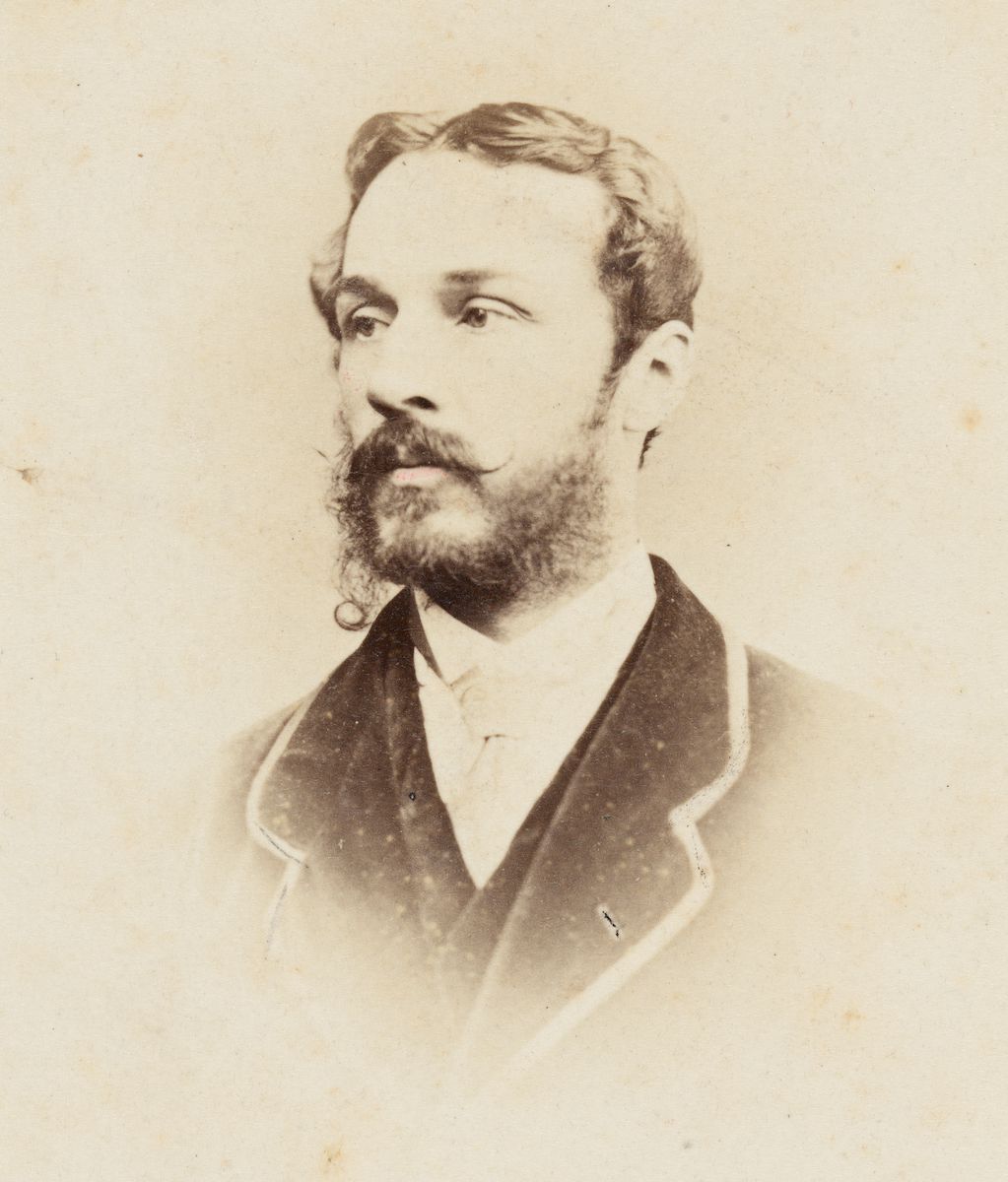 Francis Houssemayne du Boulay was born in Sandgate, Kent, on 24 January 1837. As a young man in his early 20s, he migrated to Perth (c.1858). A scientist, entomologist, natural history artist, and Coleoptera (beetle) collector, du Boulay began to collect specimens in locations around Western Australia, Queensland, New South Wales, Victoria, and other parts of Australia. He settled in Beechworth, Victoria, where he lived out the rest of his life; du Boulay passed away on 12 January 1914.

In volume one of du Boulay’s hand-painted Coleoptera volumes, inside the front cover, is a handwritten inscription in ink, “F. H. Du Boulay 1880”. Du Boulay commenced work on the volume in 1880; however, it is likely that the work continued for several years. The cover also features a note handwritten in pencil, “Names in lead pencil inserted by H. M. Giles W. Australia (Du Boulay)”. Annotations inscribed in pencil are corrections by Henry Murray Giles, who assisted du Boulay in identifying scientific names of specimens. Giles worked as a Resident Keeper (1898) and later Head Keeper (1909 – 1910) at the Zoological Gardens, South Perth, Western Australia. Giles wrote an article in the Western Australian Year-Book for 1900-01 entitled “A Glimpse of Western Australian Entomology” (see pp. 285-297).

A total of 179 Coleoptera specimens are illustrated in volume one. Locations are noted where the specimens occur; however, the locations often only indicate the state where they were collected, for example New South Wales, Victoria, Queensland, Western Australia, South Australia; or a town or city, for example Cape York, Cardwell, Rockhampton, Brisbane. Some specimens identify the sex. It would be interesting to note if the colours used are scientifically accurate. Are the specimens drawn to scale? This would require the physical volume and specimens for comparison.

On the back of the volume is a sketch, in pencil, of a childlike illustration of a man, which is accompanied by an inscription, “W. Du Boulay”. This is an illustration of Francis du Boulay’s brother William, who was a fellow naturalist and collector. The yellow cover of the volume inscribed “DRAWING BOOK E. R. COLE BOOKSELLER AND STATIONER, SYDNEY” is well used, worn and has many inkblots. It has evidence of accompanying du Boulay in the field on his collecting trips around Australia.

Volume two is also well worn with inkblots on the cover. It has a leather-bound spine and leather corners protect the cover; otherwise the volume has no distinguishing features or title page. As in volume one, the specimen illustrations are printed, then hand coloured. Not all of the specimens are identified with their scientific names. The illustrations appear to be to scale. Specimens are illustrated from a dorsal perspective. Locations of where the specimens were collected are sometimes documented. Again as in volume one, the location is only noted from which state, for example, Queensland, Western Australia, Northern Territory, South Australia, New South Wales; or towns, cities, waterways or mountain ranges, for example Blue Mountains, Richmond River, Ropes Creek, Thompson River, Cairns, Coopers Creek, Cape York, Cooktown, Princess Charlotte Bay, Cleveland Bay, Port Mackay. The sex of the specimen is also sometimes identified. 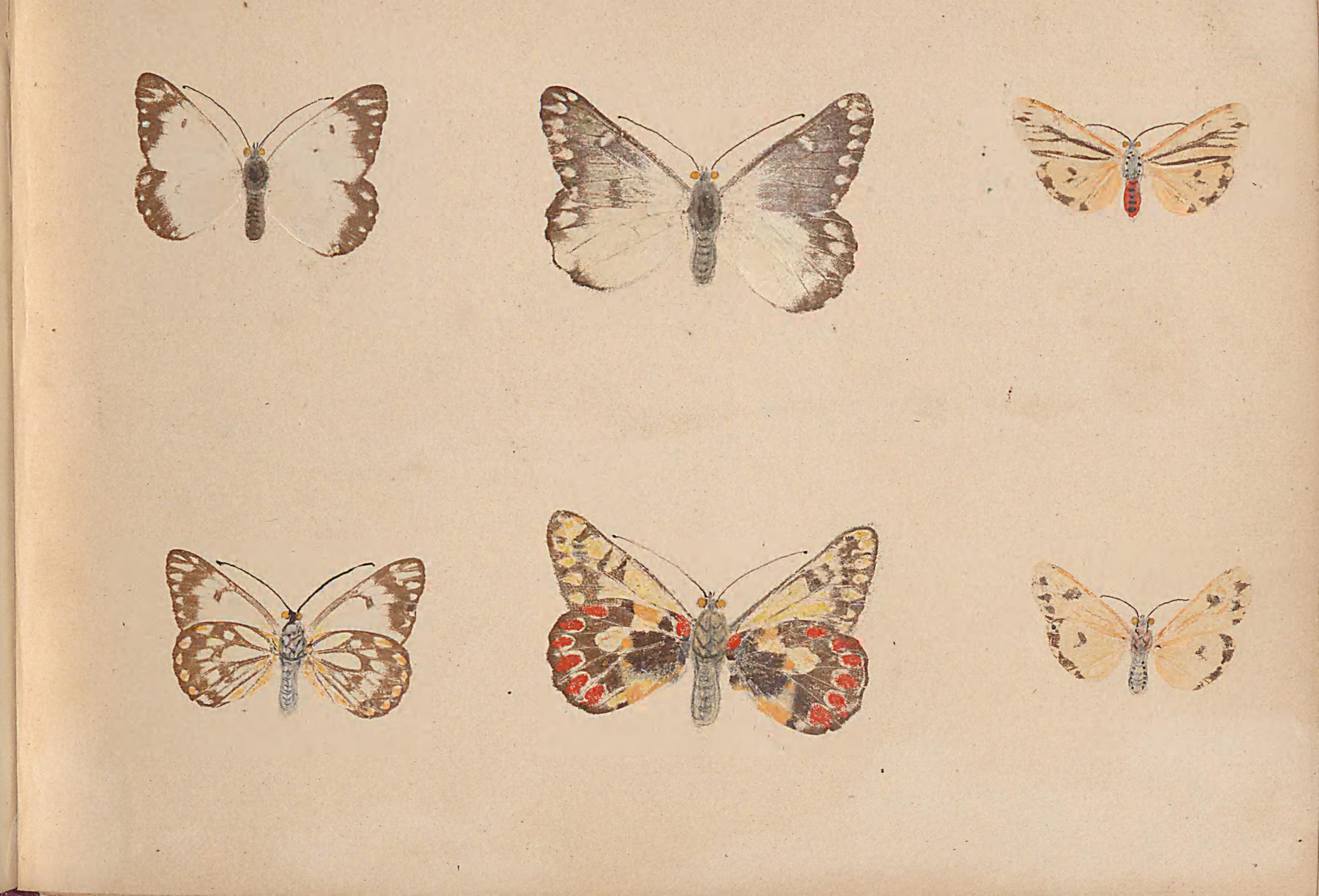 While carefully presenting these volumes to Dr. Leslie, we were both surprised to come across several pages in the second volume containing beautiful Lepidoptera illustrations. Twenty-one Lepidoptera specimens are beautifully illustrated, but unfortunately do not include their scientific names or the locations where they were collected. Simon Hinkley, Collection Manager in Entomology at Museums Victoria, noted that the “Lepidoptera illustrated are detailed enough for identification purposes, for instance, the bottom left corner [see above] is a Caper White and the bottom middle specimen is a Spotted Jezebel.” 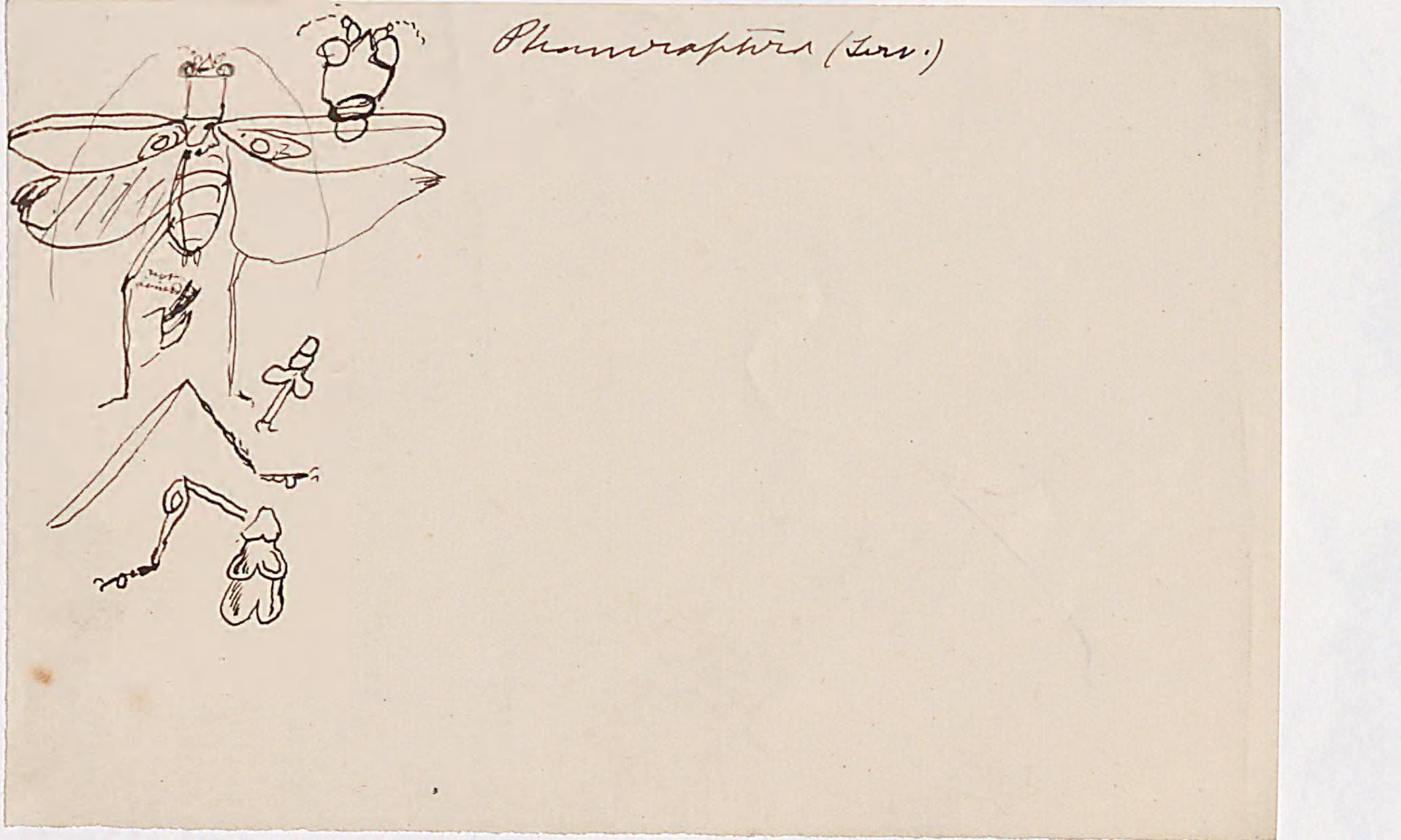 Dr. Thomas Darragh, Curator Emeritus at Museums Victoria, identified the loose sheet of paper interleafed in volume two, see above, as Professor Frederick McCoy’s handwriting. McCoy was the first director of the National Museum of Victoria, predecessor of Museums Victoria (1854 – 1899). While not an entomologist, he was a paleontologist, geologist, zoologist, academic and keen collector for the National Museum of Victoria, and he was clearly interested in this volume, enough to incorporate a rough sketch of a “Phaneroptera (Serv)”. Simon Hinkley noted the Phaneroptera is an old genus name of katydids in the subfamily Phaneropterinae and was described by Jean Guillaume Audinet-Serville in 1831.

Volume two includes a loose letter with illustrations of beetles from “Mr. Span, Rooke’s Farm, West Drayton, Middlesex”. The letter includes illustrations of two specimens from North Queensland—one from New South Wales and one from the “Interior of Continent.” An inscription below the address on the letter, written in pencil, “Compared with British Mus. Specimens by Mr Span for Mr Du Boulay”, notes that specimens held by the British Museum have been compared with specimens collected by du Boulay. A few pages following the loose letter is a specimen that has been hand-drawn from the dorsal and cross section with inscription “Schizorhina Mnizechii Larry” (an unpublished name), and beside this is an inscription, “Drawings by Mr Span from originals in Brit. Museum”.

Du Boulay’s Coleoptera volumes are significant documents of historical collecting with important scientific information for contemporary scientists. Now that the volumes are available on the BHL website, scientists can benefit from the historical and scientific data on Coleoptera collected by Francis du Boulay from locations across Australia in the late nineteenth century.

Nik McGrath is archivist at Museums Victoria. She has a master's degree in Information Management and Cultural Heritage. Prior to her work at Melbourne Museum, Nik worked at a variety of institutions including ABC Archives, University of Melbourne Archives, and the Duldig Studio, working on predominantly audiovisual and photographic archive collections. 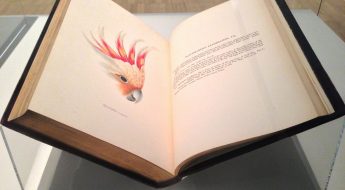 « Previous post
Celebrating the Career of Susan Fraser, Recently-Retired Thomas J. Hubbard Vice President and Director of the LuEsther T. Mertz Library at The New York Botanical Garden (NYBG)
Next post »
Towards Online Decoloniality: Globality and Locality in and Through the BHL